The Cytosponge test could help diagnosis of Barrett’s oesophagus in people who are on medication for long term heartburn. A clinical trial led by Prof Rebecca Fitzgerald in Cambridge was published last Friday in The Lancet. Here, CanTest Chair Prof Greg Rubin, who contributed primary care expertise to the trial, explains more about the test and its usefulness in detecting early cancerous changes.

Heartburn is a common symptom, affecting around 20% of the adult population. A small proportion of these individuals go on to develop oesophageal adenocarcinoma (EAC), which has a dreadful outlook, with less than 20% of patients surviving for more than 5 years and only 30% being diagnosed with early stage disease. There is, however, a precursor lesion, known as Barrett’s oesophagus (BE). BE is asymptomatic and underdiagnosed, but gastro-oesophageal reflux is the strongest risk factor, and about 1 in 20 persons with reflux symptoms have BE. 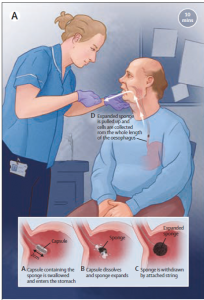 In BE, the normal squamous epithelium is replaced by metaplastic columnar epithelium in the lower oesophagus. In time, this can undergo dysplastic change and ultimately become adenocarcinoma. Over the past decade Rebecca Fitzgerald and her research group in Cambridge have identified a biomarker for the intestinal metaplasia of BE, Trefoil Factor 3 (TFF3), together with a very neat and relatively non-invasive method for its collection, a ‘pill on a string’ than dissolves after swallowing to release a small sponge, known as the Cytosponge.  Their aim has been to achieve earlier detection of EAC by testing for BE in primary care.

Development of the Cytosponge TFF3 test has broadly followed the CanTest Framework for development of new diagnostic tests, which we published in BMC Cancer in 2019. To date questions of safety, acceptability, accuracy and cost-effectiveness have been addressed by Fitzgerald’s group. The BEST 3 trial, published last week in The Lancet, addresses phases 3 / 4 of the CanTestFramework and investigated whether the Cytosponge TFF3 test administered in primary care settings led to identification of more patients with BE than usual care. For this trial Fitzgerald’s group linked up with clinical trial expertise from Queen Mary University of London (Prof Peter Sasieni) and primary care research expertise from the CanTest Collaborative (Prof Greg Rubin, Dr Fiona Walter).

For BEST3, patients were eligible if aged >50 years, had received at least 6 month supply of acid-suppressant medication in the previous year and had no record of endoscopy in the past 5 years. They were then randomised to usual care, with endoscopy if deemed clinically necessary, or to receive the Cytosponge test, administered by a nurse at the practice, with endoscopy for positive tests. All patients were followed up for an average of 12 months (range 8-18 months).

This was a big trial, involving 13,222 patients from 109 practices across England over a two year period. 2679 (39%) of patients in the intervention arm expressed interest in taking part, of whom 1750 (24%) attended for a Cytosponge test. 95% successfully swallowed the device, though for 202 patients a second test was necessary to collect sufficient cellular material for a ‘high confidence’ result.  There were 140 BE diagnoses in the intervention arm, 127 identified by Cytosponge, compared to 13 with usual care (adjusted rate ratio 10.6). Of those in the intervention arm who underwent confirmatory endoscopy, 11 had dysplastic changes and 4 had oesophago-gastric cancer (all stage 1). Three patients in the intervention arm who declined Cytosponge and three in the control arm were diagnosed with cancer. The acceptability of the procedure was rated very highly (median score 9/10) and there was only one related SAE.  The most common reported adverse event was a sore throat (63 patients). 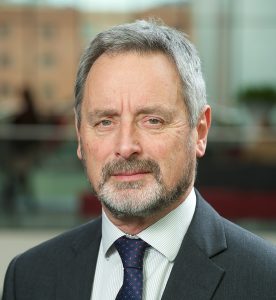 How does this fit into clinical practice in primary care? Firstly, it seems likely that in the setting of a primary care consultation, the offer of a Cytosponge test is feasible and would be generally acceptable. Second, because UK guidance on management on treatment of gastro-oesophageal reflux is for symptomatic treatment rather than early endosocopy, a simple test for BE  that is 93% specific seems a useful tool in the evaluation of patients with new symptoms. However, the BEST3 findings were in patients aged >50, and for patients aged >55, English NICE guidance advises referral and endoscopy for those patients with reflux and weight loss, raised platelet count, nausea / vomiting, or who are treatment-resistant. Nevertheless, for the patient with uncomplicated new onset reflux at age >55, Cytosponge could have a role in primary care assessment.

Some words of caution, however. The conversion rate from BE to EAC is low, in the region of 0.5% per year and there is potential for overdiagnosis with this test. Current guidance advises that only those with 3cm or more of oesophagus affected by BE should enter an endoscopic  surveillance programme. This criterion was met by 46 patients in the intervention arm and 4 in the control arm. Importantly, the cost-effectiveness of a management strategy for gastro-eosophageal reflux that includes a Cytosponge test for BE, with its consequent demands on endoscopy resource, has yet to be evaluated. Crucially, we do not yet know whether adding Cytosponge TFF3 to the management pathway for reflux symptoms has an effect on stage at diagnosis or lowers mortality from gastro-oesophageal cancer. Lastly, and critically, CytospongeTFF3 is not a test for patients in whom oesophageal cancer is suspected, nor is it a tool for triaging or prioritising patients referred with suspected gastro-oesophageal cancer.