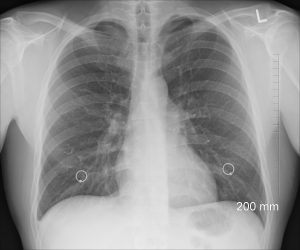 Findings from a CanTest study recently published in the British Journal of General Practice shows that chest x-ray, which is the standard test used by GPs to diagnose lung cancer, identifies the disease in approximately 80% of cases.

This work, undertaken by a team of researchers at the University of Leeds and the University of Exeter, was led by Dr Stephen Bradley as part of his CanTest funded PhD project – “The role of imaging in the diagnosis of lung cancer in primary care”.

A major systematic review was conducted, involving searching all published studies and reviewing the results of over 9,000 papers. The team identified studies that reported the results of chest x-rays taken in patients who had symptoms and who were subsequently diagnosed with lung cancer within one year. From this, the researchers calculated the accuracy of chest x-ray (sensitivity) in detecting lung cancer. This is the first study of its kind and provides the best evidence yet as to the accuracy of chest x-ray for lung cancer in patients with symptoms.

The review found 21 studies containing relevant information but most were of low quality. Three studies had a low risk of bias and these showed the accuracy of chest x-ray in detecting lung cancer was estimated at between 77-80%.

This study raises questions as to whether the UK should follow other countries in making greater use of more advanced tests like computed tomography (CT). It also has important implications for GPs and patients in deciding what to do next when symptoms are present but a chest x-ray is normal.