A new CanTest systematic review, just published in Cancers, found that several existing externally validated symptom-based tools have moderate diagnostic accuracy for ovarian cancer detection. The team concluded that the clinical impact of the most promising tools now needs to be evaluated. 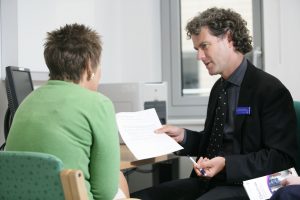 Ovarian cancer has the worst prognosis of all gynaecological cancers, accounting for over 4,000 UK deaths annually. Early diagnosis is key to improving patient outcomes, but the disease can be difficult to pick up as symptoms are often vague. A variety of symptom-based tools have been developed, ranging from simple checklists of symptoms to complex algorithms (which can be integrated into clinical computer systems), in order to help clinicians identify women at increased risk of undiagnosed cancer for further investigation. In a review, performed by CanTest researchers from the Universities of Cambridge (Garth Funston, Victoria Hardy, Fiona Walter), Exeter (Willie Hamilton, Gary Abel) and Melbourne (Jon Emery), existing ovarian cancer tools were systematically identified and their diagnostic performance compared.

The team found that although 21 tools had been developed only 4 had then been externally validated in another dataset – a step which is recommended before tools are used in clinical practice. Tools had been developed in a range of settings including hospitals, primary care and the general population, and while all tools included symptoms, some also included patient risk factors (e.g. family history of cancer) and cancer biomarkers (e.g. CA125) in a bid to improve accuracy. The accuracy of the 4 externally validated tools was fairly good – with sensitivities above 60% in most studies and specificities greater than 85% – and there was relatively little difference in performance between the tools.

CanTest Clinical Fellow Dr Garth Funston commented: “It is great that there are several tools out there that have been evaluated in multiple studies and which show moderate performance. We now need to go one step further and determine whether the most promising tools are acceptable to patients and clinicians and whether their use actually leads to improved outcomes for patients diagnosed with ovarian cancer.”