A paper published last month in the British Journal of General Practice provides insight into missed lung cancer diagnoses. The research led by CanTest Faculty Dr Stephen Bradley features the biggest ever cohort of primary care chest X-rays and gives insights into the yield and the number of false-negatives. 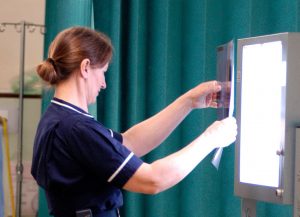 Lung cancer is the UK’s leading cause of cancer death and chest x-ray is the first line test doctors use to diagnose the disease. Previous work, also by CanTest researchers, has shown that about 20% of cancers are missed on x-ray but until now no research has shown the risk of being diagnosed with for lung cancer that is missed on chest x-ray.  In this study involving almost 9,000 patients who had requested a chest x-ray because they had symptoms, the researchers used anonymised data to work out the risk of being diagnosed with lung cancer within one year following a normal chest x-ray with different symptoms.

The researchers found that for the most common symptoms of lung cancer the risk of being diagnosed with cancer that is missed on x-ray is very low (less than 1%) but that for smokers who have coughed up blood the risk is higher (about 3%).  This finding suggests that that these patients might need more tests even if the chest x-ray is normal.  The research therefore supports existing guidelines which recommend patients are first evaluated with chest x-ray but that those aged over 40 who are coughing blood, which is not due to another cause, should be referred urgently for suspected cancer.

The research gives some reassurance to that those who have had a normal chest x-ray who have had symptoms other than coughing up blood, but it is important for doctors to bear in mind that although unlikely, lung cancer is possible following a normal chest x-ray result. That means that for patients who continue to have symptoms and who have smoked it may be necessary to organise another x-ray or other tests.

“We know that chest x-ray isn’t a perfect test for lung cancer. That means it can be really difficult to know what to do when a chest x-ray is normal but someone is at risk, for example, because they smoke, or if they have had concerning symptoms. For the first time we now know what the risk of lung cancer is with particular symptoms, which could help doctors and patients make more informed decisions.”

The study was supported by a grant from the Mason Medical Foundation.