Four cutting-edge research projects will be taking on the challenge of developing new approaches to cancer early detection and diagnosis in primary care. The high-risk, high-reward projects will explore innovative areas of research, with multidisciplinary teams each receiving up to £230kto conduct feasibility work. 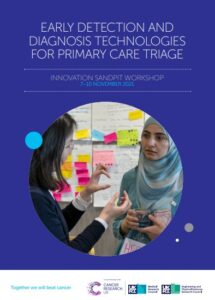 The newly funded teams were formed at a ‘sandpit-style’ workshop held late last year. The workshop was jointly hosted by Cancer Research UK (CRUK), the Medical Research Council (MRC) and the Engineering & Physical Sciences Research Council (EPSRC), and led by CanTest co-director Prof Fiona Walter with a team of mentors that included CanTest steering group chair Prof Greg Rubin. The aim was to stimulate novel and innovative approaches to triaging primary care patients who may be at risk of receiving a cancer diagnosis.

The event united the cancer research community with a diverse range of other disciplines including engineers, chemists and physicists. Participants then teamed up to pitch for funding of pilot studies that were developed over the course of the workshop. Dr Sam Merriel, CanTest clinical research fellow at the University of Exeter, is a member of two of the successful teams.

The first successful concept, called ‘Samplecam’, is a multimodal electronic capsule for identification of visual and biological markers of early stage colorectal cancer. The project brings together researchers from the Royal Marsden Hospital and the universities of Exeter, Surrey, Birmingham and Oxford. This team will develop a prototype ‘Samplecam’, informed by data captured from patients with Lynch Syndrome undergoing colorectal cancer surveillance, focus groups with primary care patients and members of the public, and a neural network analysis of high-resolution imaging data.

The second funded idea, called ‘Sens or pass’, will develop a toothbrush sensor that can recognise markers of cancer in gastrointestinal and upper respiratory tracts in saliva. Alongside Sam are team members from Swansea, De Montfort and Newcastle universities and the universities of Bristol and Leeds. This study will identify candidate proteomic cancer biomarkers from existing databases and head and neck cancer cohorts, for which a prototype sensor with molecularly imprinted polymers will be developed and tested.

Sam says “Attending the sandpit workshop was a wonderful opportunity to explore new and novel ideas for a research area I am passionate about with research colleagues from very different backgrounds. The environment created by the facilitators, directors and mentors allowed me and my fellow sandpit attendees to really push the boundaries with our thinking and pitch some exciting, high-risk ideas that could make a difference in the early diagnosis of cancer in primary care.”

The other successful teams will study an improved method for ctDNA detection for pancreatic cancer and a multimodal risk stratification method for GI cancer. The funding panel, comprising of the workshop directors and mentors plus MRC and EPSRC representatives, awarded the best proposals up to £230,000 each. The projects are due to commence spring/summer this year and run for a period of 18 months.

Sarah Birch, research programme manager for early detection and diagnosis at CRUK, said: “We are so pleased to see the results of such a great sandpit event. The sandpit participants really worked with such vigour, enthusiasm and commitment and as a result, will be working collaboratively to make significant strides forward in the ever-important field of early detection and diagnosis research.”

Find out more about all four funded projects and the workshop process here.